“In The Land Of Jesus” pilgrims with Father Philip Pavich, OFM

With his customary insight and reverence, Fr. Philip interprets scripture and describes Christ in contemporary terms with modern parallels and timeless lessons as well as in historical terms.

We follow Our Lord on a boat such as Peter used, go to the mountaintop, to the Temple in which he taught, walk along the same country road and join Him as we climb the hill of Calvary.

As you read the daily itinerary, hear the voice of Jesus calling you, “Come, follow me.” It is a once in a life time experience!

Day 1 Depart USA Our spiritual journey begins today as we depart the U.S. on our evening overnight flight to Tel Aviv.

Day 2 Arrive Tel Aviv
Greeted by our local guide who assists and accompanies us throughout our stay. Our Mass of thanksgiving for a safe journey takes place in the ancient Roman port city of Jaffa – home of Simon the Tanner – on the Mediterranean Seashore before continuing along the coast and stopping at Caesarea Maritime -an important site to St. Peter and St. Paul – including the Roman aqueduct and amphitheatre and Crusader fort. After our get-acquainted dinner tonight, we can walk along the seashore literally walking in Jesus’ footsteps. Mass at St. Peter

Day 3 The Hidden Life of Christ – Beginning of His Public Life Sailing across the Sea of Galilee in a replica of an ancient wooden boat, we see the Bible unfold before our eyes. Disembarking at old Capernaum we stop at the historically authenticated house of Peter before our drive to the Mount of Beatitudes. The seven springs of Tabgha -the site of the Multiplication of the Loaves and Fishes. Next to the seaside Sanctuary from which the Apostles cast their nets where Christ gave Peter the keys of the kingdom. 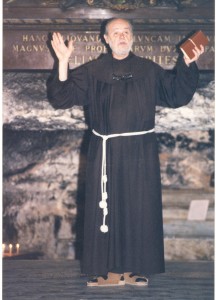 At his first public miracle in Cana where He changed water into wine (with time to renew marriage vows) we leave for Nazareth and the grotto where the angel appeared to Mary. We walk to the workshop of St. Joseph’s and the actual well Mary drew water from each day. Drive to Megiddo and Mount Tabor, we ascend to the Holy Mountain of Christ’s Transfiguration to offer our prayers. Mass at the Grotto of the Annunciation

Day 4 “Going up to the Lord” Driving along the shore of the Sea of Galilee to the Baptismal Site of the River Jordan to renew our Baptismal promises, we then pass through the Jordan Valley and begin our ascent to Mount Carmel where we are found listening quietly for Gods whisper in Elijahs cave. Going up to Jerusalem and our home at Notre Dame, we have time after dinner this evening to walk around the Old City Walls. Mass at Stella Maris

Day 6 Watch and Pray We gather in the Upper Room, where Jesus instituted the Eucharist and Pentecost occurred. After Mass at the Cenacle, stopping at Mt. Scopus, we return to the Old City and enter via Lions Gate to the Crusader Church of St. Anne, to the Pools of Bethesda, and the Temple Mount Jesus visited regularly. We enter the Dome of the Rock where Abraham was to sacrifice his son. We leave via the Moslems Quarter for our bus, driving to St. Peter in Gallicantu where we descend into the cistern in which Christ was lowered for the night. Alongside the church we remember Peters denial as we ascend the Holy Steps which led up to the High Priests house. Mass on Mount Zion

Day 7 The Cross and the Crown Entering the Old City at Lions Gate , we follow the Way of the Man of Sorrows carrying our wooden cross on the Via Dolorosa to the site of His scourging where He was then crowned with thorns. Through the Christian Quarter and Ecce Home Arch, to the Fortress of Antonia – where Pontius Pilate held trial, past Lithostrotos up the hill of Calvary where He was crucified and our sacrifice of the Holy Mass is offered. Mass in the Holy Sepulchre

Day 8 Glorious Resurrection The town of Bethany-home of Martha and Mary and the tomb of Lazarus. We stop to walk along the ancient Roman road of Emmaus before continuing, through the desert of Judea past grazing camels and Bedouin encampments recalling Christs time in the desert . Stopping at Jericho-the oldest known city in the Western World. overlooking the Mount of Temptation and Mount Nebo. Via cable car ,we ascend to Herods palace atop the mountain of Masada. Our visit to the Dead Sea allows time for a swim before stopping at the caves of the Qumran community where the Dead Sea Scrolls were discovered. Mass in Bethany

Day 9 -10 Sacred Space Sunrise finds us celebrating Mass at the Holy Sepulchre inside the Empty Tomb of Jesus Christ as our search in this land comes to an end. Our final devotions today on Calvary and the Chapel below where St. Helena discovered the true Cross. Mass – Empty Tomb

DAY 12 ROME
Tuesday Morning visit to St. Peter’s Basilica, Santa Maria Maggiore,with mid-day lunch break before our afternoon visit to the basilica where the chains of St. Peter are enshrined, visit in the Coliseum, Palatine Hill, the Roman Forum, Capitolium Hill and Circus Maximus. Afternoon includes San Giovanni Laterno, the Holy Stairs, the Old Appian Way and the Chapel of “Domine Quo Vadis”, the Catacombs and the tomb of St. Paul.

DAY 13 ROME
PAPAL BLESSING – VATICAN MUSEUMS
Wednesday Early morning departure to square of St. Peter’s for Papal Audience and Blessing with the Holy Father passing through the Villa Borghese and Castel S’Angelo on the way. Afternoon visit to the Vatican Museum including the Sistine Chapel completing your full day’s visits.

Depart Tel Aviv crossing at the Allenby Bridge Border into Petra, we stop along the way at Mount Nebo. It was from here Moses viewed the Promised Land before his death.

DAY 12 – PETRA
Out of the Jordan Valley, green and lush into Lawrence of Arabia country, past goats and sheep, we descend twisting and turning into the valley of the Wadi Mousa, winding our way through the narrow cleft in the mountain, its walls towering high overhead, and soon walking in shadow. Petra has something almost supernatural, a city of the dead . These people believed in the afterlife more than life itself. That’s why they spent so much time building their tombs. Dates range for the Treasury, from the first century B.C.to the second century A.D.

Through the Valley of Moses in a hidden away narrow canyon known as the “siq”, our visit to the remains of past civilizations is powerful. Long ago worshippers climbed up to the high places of sacrifice. The Royal Tombs have been carved into the rock face, known as the King’s Wall. The Palace Tomb was built in imitation of a Roman palace from the 6th century B.C. The remains stagger the imagination, and evoke wonder and admiration for the minds and wills of the people who could conceive and bring into being such great and beautiful monuments.